I started training BJJ back in 2005. I had a athletic background of football and typical weight room stuff, but I had zero experience in wrestling or any other martial art. So takedowns were not a strength in my game in the beginning. The ability to change levels quickly and explosively were not there and if I was able to get under someone I had really bad positioning in my body to have any strength to finish the takedown. I began to really breakdown what the problem was. I had poor squat mobility, bad posture, and had no power driving out of a low position. After a couple years of practicing and trying to improve my faulty movement patterns, I began to incorporate the olympic lifts into my strength and conditioning program. This was the single best thing I ever did for my BJJ game. The olympic lifts had a direct crossover into my takedowns and filled the holes I was missing of strength, power, mobility.
The olympic lifts are the Snatch and the Clean and Jerk. Both movements are quite complex, displaying the most efficient way to move a load from the ground to over your head. The snatch is one un-inturupted movement pulling a weight from ground to overhead. The Clean and jerk is broken into 2 moves. The clean, which is pulling the weight from the ground to your shoulders, then re driving the hips up pushing the weight over head. Typically a athlete will snatch less then they can Clean and Jerk. The idea of a Olympic weightlifting program is develop strength, speed, and power through these lifts. The complexity of the move allows us to segment them up and focus on specific weak areas. For example we will use lots of front squats in OLY program to help build squatting strength for the clean.


There are 3 huge benefits of learning these lifts that will increase your performance for BJJ.

2.Speed and power: Developing speed and power in that same hip function will give you tremendous strength for your takedown game. Also when your in the “catch” portion of a lift you use speed and power again to drive out of that full squat position. This complex move of being able to extend the hips with lots of power and then drive under and pick up the weight with the legs mimics a double leg takedown to the tee. The more speed and power we have in that move, the higher our takedown percentage goes up.


3. End-range mobility:. Specific to the sport of olympic weightlifting and Brazilian Jiu-jitsu, is the ability to go to a true end range mobility of the joint. In jiu-jitsu it is the intent of your opponent to put your major joints into a end-range psition as a means to submit you. Arm-bars, knee-bars, wrist and ankle locks, and even shoulder locks such as americanas or omoplatas are version of submission locks used in jiu-jitsu to force a joint beyond that end-range. Mobility to a true end-range position will allow you more movement to escape and more time to react intelligently, but if you have “tight shoulder” you will start to feel pain way before getting to that fully extended position and if you are forced there you can almost guarantee a submission or injury will occur. Olympic weightlifting exposes all mobility issues in a full squated position with arms locked out over head in a snatch and elbows parrlallel with the floor in the catch of a clean. Repetitin of these lifts will force you to learn how to drive your body into these end range positions and react with speed and power which in jiu-jitsu can mean the difference between tapping or escaping and countering. In the end range position or in any submission lock mobility will keep you from tapping and tension will keep those joints from snapping. So practicing and strengthening end-range mobility is very important and specific to BJJ. 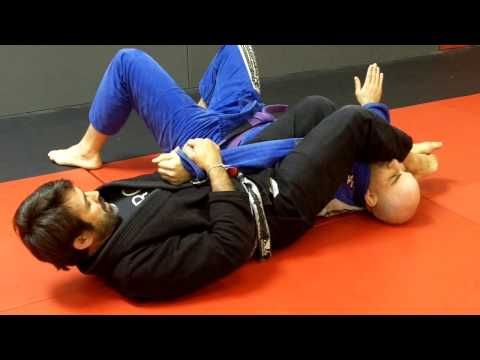 Other points of benefit:
Often in the sport of BJJ, competitors face the challenge of trying to get stronger without gaining weight in order to stay in their weight class. Hypertrophy training is what causes muscle growth. Bodybuilders and physique inspired trainees utilize hypertrophy training to grow the size of their muscles. Hypertrophy training refers to high reps and sets of moderate weight, often something along the lines of 5-7 x 12-15 reps for 3-5 exercises.  These type-1 muscle fibers are much larger and weaker than there counter the type 2 muscle fibers, and the over sized muscles often lead to mobility restrictions and imbalances. The type-2 fast twitch muscle fibers that we want for BJJ are extremely strong and fast, they are also much smaller in volume. These muscles mean more speed and power with less size and body weight. You build these muscles by working heavier, faster, and for way less reps. Often between the 1-3 rep range. This is how we train for speed and power in the olympic lifts. Olympic lifting will make you faster and stronger then all opponents in your weight class without gaining the body weight and size forcing you to move up a weight class. The 2 lifts in the videos above were a snatch at 285lbs and a clean and jerk at 315lbs performed by Chad Vaugh, Chad weighs in at 169lbs! Great example of strength to bodyweight ratio when you establish the speed, power, and the ability to move quickly and comfortably through those movements. Because of its specificity and lower reps and volume, olympic lifting does not make you sore. Which means less recovery time so you can keep your hard training on the mats while kicking ass in the gym too. Maybe if your new to the lifts you will have soreness in your joints stretching to those end range positions but that will go away as mobility improves, and again that’s just a exposed weakness in your bjj game. If a barbell overhead makes your wrist hurt a can promise a wrist lock will be much worse. But muscle soreness and fatigue generally does not occur in olympic style lifting.
Another thing I love to compare Olympic lifting to Bjj is the ability to learn “reaction”. In bjj competition were not fighting grappling dummies, were fighting real individuals who are thinking and executing their own plan in reaction to mine. Submissions, sweeps, and takedowns all require technique but in live rolling it comes down to your reaction to the other person that completes the move. You’ll never be able to just grab the sleeve, lock the shoulder, create an angle, put the leg over the head, and pull a arm bar. Its more like a long line of some of those things and usually a whole lot more that actually gets the submission, but knowing the starting and end point and having positive reaction to your opponent will get you the tap. Same thing in weightlifting, we train to do a perfect lift with a straight back, posterior chain engaged, heels pressing through the floor, and upright torso………..But if you are truly testing yourself for a max lift, those things aren’t going to line up perfectly. But knowing the starting and ending point and having a good reaction to the external force will get you a solid lift.
Olympic lifting and Brazilian Jiu-jitsu are both sports. There is a time to learn and make it perfect in training, and there is a time to test the limits in for a victory! Using the aspects of building spped and power as well as extreme mobility through dynamic movement from olympic style weightlifting can have a powerful benefit in your jiu-jitsu game. I recommend training these lifts 2-3 times a week. We now offer a 2 and 3 x a week olympic lifting training program at Basin CrossFit. If your interested in learning more about the olympic lifts or want more info on our class drop us a line here.